Corsetting: It’s All About the Infrastructure

Yes, it’s all true: I am in mid-corset.  Because I have to make a Regency coat, and it won’t look right without the infrastructure (modern underpinnings will not cut it).   To my considerable surprise, the whole process is much simpler than I had imagined: with a decent pattern, up to the point I’ve reached now, it’s really a matter of tracing the patterns (I’ve been using baker’s parchment) and cutting out the pieces and following the bits and pieces.  My gusset-anxiety has proved to be an over-reaction; gussets are no harder than anything else.

So here’s how it’s been coming together.

The interlining (you do this first, both as a “try on” piece and because if you’re going to screw something up, might as well be on the layer no one will see):

It’s amazing how real it all looks with the stitches in and everything.  I am surprised by this every time I sew.  Here’s a closer look at the gussets because I’m so pleased with them.  The fabric, by the way, is coutil, which is a very closely-woven fabric with a herringbone patter, and the preferred material for the interior of corsets.

And here are the gussets, all pinned, for the lining.

And here are the lining and interlining, all in form and pinned together, awaiting only the exterior layer.

And here’s the cover, in a plain figured cotton.  I decided against satin or anything ritzy: I want this to breathe.  I also decided against cherry red or deep blue (although white, as the color of choice for corsetting, didn’t become popular until the Victorians) because I plan to wear a light-colored dress over it.  Which I will have to make.  But that’s another post.  I still have to stitch the hip gussets and the strap seam.  Then the whole gets pinned to the already-pinned lining/interlining, and basted together.  And then the really cool/scary part begins: the boning. 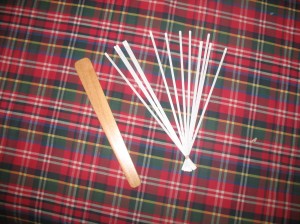 The thing that looks like a ruler is a busk: a flat piece that will run up the front between the breasts.  The rest are stays of varying lengths.  By the time you read this, I may already have begun that part.  I will review my progress next week.

writer, editor, baker END_OF_DOCUMENT_TOKEN_TO_BE_REPLACED
This entry was posted on Friday, July 1st, 2011 at 12:11 am and posted in Miss Tolerance, Regency sewing. You can follow any responses to this entry through the RSS 2.0 feed.
« Another Reason to Write
Blood, Sweat, and Whalebone »

2 responses to “Corsetting: It’s All About the Infrastructure”