Or a hat.  In the olden days–by which I mean the first half of the 20th century–people wore hats.  Look at photos from the 1940s–even in the 1960s, men wore hats.  Women wore hats and gloves.  These days, not so much; the world is damned lucky if I wear slacks rather than jeans; a hat?  Forget it.  But in Miss Tolerance’s time you really weren’t dressed to go out unless you wore a hat.  Or a bonnet.  The difference between the two appears to be ribbons: if it tied under your chin it was a bonnet.  If it stayed on by some other means (karma? hatpins? library paste?) it was a hat.  The bonnet I faunch over is one worn by Kate Winslet in Sense and Sensibility:

I wouldn’t look good in it, but really, who cares?  It’s gorgeous.  Note the ribbon ties that make it a bonnet.

Anyway: this week I made a bonnet.  Yup.  As with all my recent excursions into Regency clothing, I suspect the next time I do this I will do a better job.  But it’s a start.

I found a tutorial on making a simple soft-poke Regency bonnet and pretty much followed it, except that I could not find a straw hat to use as a base.  The best I could find was this:

This will henceforth be referred to as The World’s Ugliest Plastic Hat.  My first task, then, was to remove the ruffle on the brim and lop the hat roughly in half:

Next, I bound the edge of the cut, because this stuff will unravel if you look at it sideways:

Because TWUH is made of plastic, not straw, I wanted to cover the brim so the Ugly would not be as easily noted.  Because this is Miss Tolerance, who prefers, for business purposes at least, to make her clothes as severe and respectable as possible, I went with a shade of slate blue slightly darker than the dress I made:

This, if I say so myself, was a big pain in the neck, but once the brim was covered and pinned into place, I started to line the bonnet, again because TWUH’s interior is no lovelier than its exterior.  So I sewed a ruffle onto a piece of light-weight gray “satin” and started pinning that to the underside.  My thinking here was that once pinned, a single set of stitches would attach both the brim covering and the lining, and Lo, it worked.  I love it when it works.

Here is the finished, gathered lining.  It might have worked better with more fabric or a lighter fabric; next time I’ll know.

Now came the tricky part (so tricky that I forgot to take photos): putting on the capote, or soft crown.  I folded a piece of soft gray lining fabric in half widthwise, sewed it into a tube, folded it in half lengthwise, and gathered it into a soft rounded cone.  (This sounds more confusing than it is…the directions in the tutorial weren’t much easier to parse, I’m afraid.  You kind of had to be there. ) 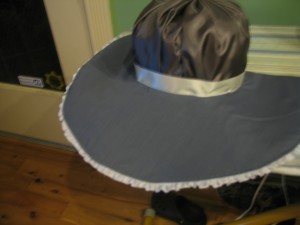 Stitching the crown in place was probably the most difficult sewing of the night, because I had to make sure I caught all the fabric, and the plastic of TWUH was thick and annoying to work with.  I also basted down the upper edge of the brim cover (which caught the lower-edge of the lining inside.  I like it when work does double duty).  . The ribbon is pinned in place to hide the unsightly join.

With the ribbon in place, I basted it to the hat–and to the back of the capote where there was no hat.  A second bit of ribbon in the back covered the raw edge of the capote fabric.  And here, for all its flaws, is my new bonnet:

Next time I will not be in such a hurry, and I will get the proper materials.  I might even get a real pattern.  When I am seized by inspiration it’s really hard not to just dive right in.

Speaking of which, I really should get back to actually writing stuff….

writer, editor, baker END_OF_DOCUMENT_TOKEN_TO_BE_REPLACED
This entry was posted on Friday, September 2nd, 2011 at 12:22 am and posted in Regency sewing. You can follow any responses to this entry through the RSS 2.0 feed.
« The Sign and Statement of Loss
History is an Unknown Country »

5 responses to “You’re Never Really Dressed Without a Smile”